The History of the Early Church course unit is designed to provide students with an overview and general understanding of the early centuries of Christian history. In this course we study the early history of the Church established by Christ, focusing on the challenges that the Christians of this period faced as they attempted to understand and live out their faith.

H2010 Medieval Christian Experience
Stage 2 of a level 7 award (BDiv or Grad Dip Th) 15 credits
This course examines the rich diversity that marks the medieval articulation of the Christian vision. The artistic and devotional inheritance of the Middle-Ages is set within the context of the Medieval Church’s urgent need for institutional and theological reform.

The contemporary religious landscape is still marked by the creative, yet destructive, upheavals experienced within the cultural, theological and devotional life of the sixteenth-century Church in Europe. This course examines that abiding inheritance and pays particular attention to the Eucharistic disputes of the Reformation period.

Stage 3 of a level 7 award (BDiv or Grad Dip Th) 15 credits
The French Revolution and the Enlightenment mark a turning point in the Churches’ relationship with European culture and political thought. This course reviews how the Missionary movement, fundamentalism and the revival in biblical, theological and liturgical studies influenced the Church’s relationship with the modern world.

This course examines the origins of philosophy in ancient Greece, its development during the Hellenistic and Roman periods, and its encounter with Christian thought during the early Middle Ages. The course covers major thinkers from the Pre-Socratics, Plato and Aristotle through to figures such as Augustine, Boethius and Anselm of Canterbury, especially in terms of their impact on the formation of Western thought and society. Key areas of philosophy explored include epistemology, logic, metaphysics, ethics, and social and political philosophy.

Stage 1 of a level 7 award (BDiv or Grad Dip Th) 15 Credits
Details to be posted.

Stage 1 of a level 7 award (BDiv or Grad Dip Th) 15 Credits
Details to be posted.

Stage 2 of a level 7 award (BDiv or Grad Dip Th)
This course examines, in the wake of the revolution initiated in philosophy by Immanuel Kant during the late eighteenth century, various strands of philosophical thought in Late Modern and Contemporary Philosophy. These strands include German Idealism, Romanticism, Phenomenology, Existentialism, Hermeneutics, Pragmatism, Analytic Philosophy, Poststructuralism and Postmodernism. Attention will be given to how the development of philosophy throughout modernity has influenced the way philosophical and other questions are posed, articulated and addressed

W7309 From Descartes to Kant

Level 7, 15 Credits (use in BTh or Grad Dip Th)
The Descartes to Kant course unit covers the history of thought in the West from the time of Descartes (early 17th century) to the time of Kant (end of the 18th century). We study “modernity”, the philosophical approach which led to the Western Enlightenment, and eventually to the rise of Western secular society.
W2010 Philosophy of the Human Person
Stage 2 of a level 7 award (BDiv or Grad Dip Th)
The Human Person course unit examines the philosophical anthropology of major texts and thinkers from the history of philosophy. It takes in classical traditional accounts from a Christian perspective and critical accounts from psychological and other perspectives.

Stage 3 of a level 7 award (BDiv or Grad Dip Th)
The Metaphysics course unit address the most fundamental questions at stake in our understanding of reality in all its forms, by considering the perennial questions of being and existence, God and the human soul. This unit complements those approaches to theology which are shaped by philosophical concepts and modes of reasoning. 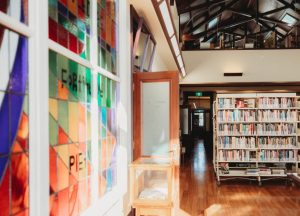